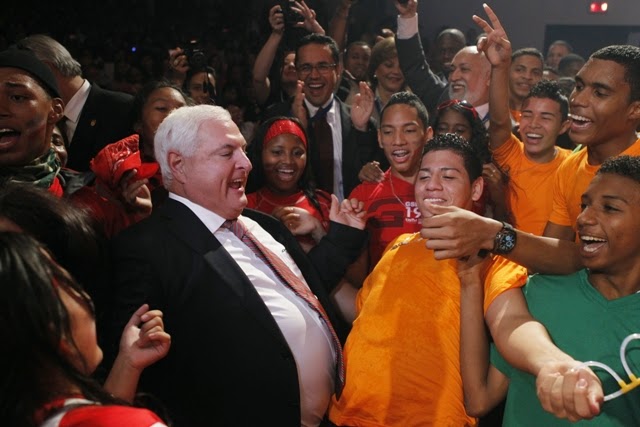 It's not just crazy gringos who go into a siege frenzy whenever someone stares a bit too long at their garden furniture from outside their walled compounds, dear reader. A certain class of Panamanians suffers from the same malady, especially those who work for newspaper La Prensa.

Monday, they ran a story about how our president Martinelli, his family and his friends, control much of the hydroelectric concessions and projects that have been licensed by the government of that same Ricardo Martinelli. It's such a lucrative scheme that in Panama there are now more hydroelectric projects planned and being built than in all of Central America together.

That same morning, at about 7:30, Martinelli had read the story, reached for his Blackberry, and started twittering his thoughts. Usually this is a bad idea, because he's manic, or drunk, or both, and tweets things he'll regret later. Like when he couldn't separate his various identities any more and insulted a woman over her fat rolls.

This time, he directed his ire towards the journalist who had written the piece in La Prensa, Santiago Cumbrera:

Cumbrera was fired from El Panama America because he took bribes and sexually molested women? Truth is, Cumbrera resigned when Martinelli's friends took over that newspaper. So, has Martinelli gone berserk? Clearly so. Or maybe he hired Monte Friesner to manage his twitter account, who knows.

Anyway, it's just Martinelli and it's just Twitter, right? The first one is known for his manic rages, and the second for being a platform where many flame wars are fought on a daily basis. A twitter spat. Duh. Nothing to see here, ladies and gentlemen, please keep walking.

But that was obviously not how the attention seekers at La Prensa saw it. Today on the front page, they rehash most of the hydroelectric story and add a headline about "International condemnation for presidential tweet". And inside, they run a story titled, "The outbursts of the president".

As if he's about to test nuclear missiles.

To give their stories some flesh on the bones, La Prensa ran to its trusted friends at the Inter American Press Association, a cabal of ultra-right wing oligarch media owners who equal press freedom with their freedom to run business empires. La Prensa interviewed its old friend Danilo Arbilla, a former Uruguay dictatorship figure who oversaw the closing down of opposition newspapers and locking up of critical journalists and other such malcontents.

This Arbilla, under whose reign numerous journalists and writers were tortured and disappeared, is then quoted by La Prensa as if he were some sort of press freedom hero, to denounce a tweet by the president of a country where no journalists are in jail or go missing, where no whistleblowers are lingering in solitary confinement and where no media outlets are closed down by dictators.

The sad truth is that press freedom in Panama is not under threat from those in power, but from a bunch of attention seekers and poseurs who think that an inflammatory tweet is a threat to their corporate empire, and to whom press freedom is only under threat when they feel somehow attacked. This is not a paper under siege; it's a paper trying to sell subscriptions for its recently introduced paid online service by trying to make chicken soup out of chicken shit.