Updated below - Just days after we reported here about the mega-crime wave that currently haunts the Pacific coast between Chame and Playa Blanca, the wackiest elements of the so-called English speaking expatriate community are joining forces to do something about it. And what do gringos do when confronted with colored people stealing their lawnmowers? Right. They form an armed militia!

At this very moment, a meeting is about to begin at La Ruina, in Gorgona, we understood from an email from former Washington DC cop-turned-online-pharmacist Jim Rizik:

I have confirmed a meeting on February 20, 2013 Wednesday at 10 am at La Ruina in Gorgona. Don Winner will be in attendance and I hope to confirm members of the DIJ, police department, and other VIP's. La Ruina will not be serving food but you will be able to buy beer, soda, water. Members of the press are being invited as I am about ready to do a press release. This meeting is for everyone from Punta Chame to Rio hato.

One thing that has been on my mind. I have been hearing people discussing forming a "vigilante group" to take care of the situation. I hope this is just "beer talk" and nothing more. This is a BAD idea.

Now here's why this doesn't make sense. The press release talks about the "Nuevo Gorgona Vecinos Vigilantes". Then Rizik says that forming a vigilante group is a "BAD idea". Then at the same time he teams up with a gun-toting and violent madman like Don Winner - a person even the FBI at the US embassy says people should stay away from. Don Winner, of course, is one of the driving forces behind a crime spree of foreign hustlers and criminals who have fleeced foreigners in Panama for a hell of a lot more money than any petty thieves in Chame ever could.

To boot: Winner was instrumental in pumping the scams of one Mary Sloane and her accomplices, and vilifying the people who actually sued her to get their money back (they won, by the way). He is in a business alliance with Marco Shrem, the former gun-runner for the cocaine-financed Colombian AUC death squads. Shrem took a lot of people's money on deposits on a development and then claimed that someone else stole it, a story that has more holes in it than a Swiss cheese. Winner runs pump and dump schemes with PTQ stock. He's been promoting the frauds of former patriot militia man - yes, you read that right - Mark Boswell a/k/a "Rex Freeman", even hiring the guy as his financial columnist. Boswell having fled the country, he then started pimping Monte Friesner's credit card scams. And we're only at the very tip of the iceberg here.

Don Winner won't do anything about a crime wave; he IS the crime wave.

Put bluntly, if these ignoramuses wanted to tank the value of their properties and keep tourists away, inviting Don Winner to join the crime wave would be an excellent idea.

On online message boards, some of these gringos are already drooling at the idea of running around with guns, killing people:

Gringos are known to be unarmed, uniformed and easy targets. If one person had a gun they could have laid some Pana scum down!! The police are not interested in helping solve or prevent crimes here especially if it is a gringo victim. Arm yourself you are now on the pana menu to be eaten if you are in Panama!!!

Nothing good will obviously come from this meeting in Gorgona by a bunch of gringos who are, true to form, going to "do something about it" by laying "Pana scum down". Worst case scenario is that we get similar situations as with that other ex-cop, Ron McGrew, a racist with anger management issues who murdered someone he thought to be a burglar in a neighbor's house. Good luck patrolling the neighborhood, guys! 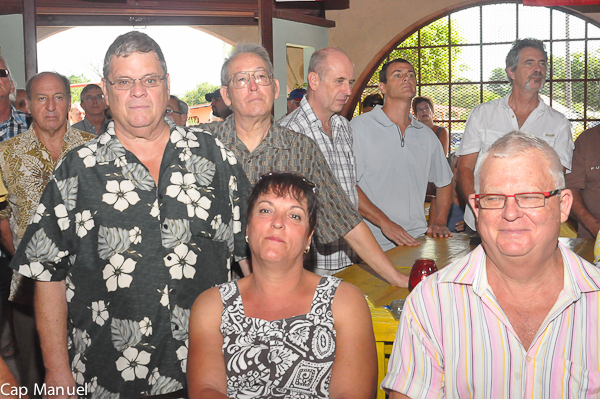 Update - And we have a winner: This version of the meeting on Playa Community. Nothing about the Don Winner crime spree. Instead, an eager question, "can we kill? can we kill? Please?"

A question was asked with regards to the use of a gun for the sake of defense: The use of a licensed gun in the defense of your life is not against the law. However all shooting deaths are investigated.

A great time was had by all.

Update 2 - La Prensa covers the event as well, here, saying that the police claims that many of these burglaries can be blamed on residents leaving doors and windows open and trusting employees with keys and even the combinations of their safe.

And you thought you were safe because you bought into a gated community? Hahaha! The police says that they don't have access to places like Decameron, Playa Blanca and Buena Ventura. These only allow access to the police in case of a violent crime.

Update 3 - To get an idea of the kind of gringos we're dealing with here and their staggering ignorance, you should read this comment on the Panama Forum website - by some snotty gringo who I'll bet you doesn't even speak Spanish - which includes this gem:

"So, we had a military base here for many years and we built and controlled the Canal. In light of the fact that this canal is a major source of revenue for this government, do you not think it was worth it? Aside from these two issues, what have gringos done to Panamá? Other than to complain about the inefficiencies here, how has the gringo affected you personally? This is a serious question; please enlighten me."

Well, how about a military invasion that killed thousands, just to catch one guy who was entirely your own creation? Would that be enlightening enough for you?

Update 4 (Feb. 22) - T he beach gringos can't get enough of Don Winner. Next Wednesday, February 27, they have yet another event for plastic expat people where this walking crime wave can talk forever about how great he is:

We have a last minute confirmation that Don Winner of Panama-Guide.com will speak at the Playacommunity Mixer at 11am. Don has lived in Panama for 20+ years, is knowledgeable about Panama’s crime reporting process and criminal system. He has been responsible for bringing a number of criminals to justice in Panama. Most of all, he understands Panama’s culture and is one heck of an interesting character.

So here's the expat gringo attitude towards crime: Done by colored Panamanians it's really, really bad. Done by a lunatic right-wing white gringo it's great, and makes the perpetrator an "interesting character".

Update 5 - As was to be expected, Don Winner once again takes his cues from fraud artist Monte Friesner (one of his clients), with some old and inaccurate news about the "conviction" of yours truly which is in reality being appealed. Don Winner hits back - with a Q-tip.