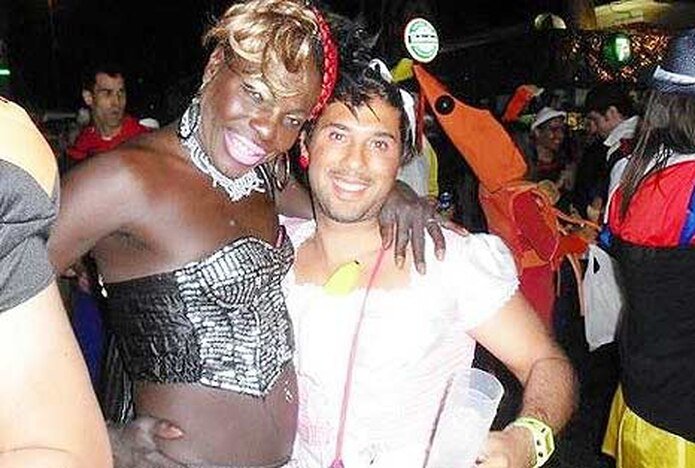 The white guy is Panama's consul to the Canary Islands.

We didn't know we had one and we don't understand why we need one, but Panama employs a consul in the Canary Islands, a colony of Spain just off the African coast. This little known fact had probably continued its existence in obscurity, were it not that this consul, one Italo Giovanni Afú Quiel, has caused a bit of a scandal when pictures appeared of him partying in the streets dressed up like a woman, a banana firmly planted between his fake breasts, as part of carnival celebrations on the islands.

And now Panamanians, after the bruhaha about that other consul Tomas Guerra (A Calle Uruguay nightclub owner who got posted to Miami for serving Martinelli free drinks during the campaign) who went on TV to show the world that he is a bumbling idiot who doesn't know how the Canal works nor the basics of Panama's history and geography - those Panamanians have discovered that their government and its foreign service members are imbeciles, dear reader. Turmoil!

But wait! Italo Giovanni Afú Quiel - doesn't that name ring a bell with you? It should!

Yes, just under a year ago, we reported here how this character used to be a brand manager at Hermanos Varela, the company of our vice-president and minister of foreign affairs that produces very bad rum and seco. And then it turned out that Varela was using his diplomats to boost foreign sales of his booze, and this very Canary consul/transvestite was sending out emails promoting special offers on rum purchases. Remember now?

Italo Giovanni Afú Quiel appears to be family of the infamous Carlos Tito Afú, embroiled in the CEMIS scandal - he was the guy who gave a press conference denouncing how he had accepted a bribe, waving a fistful of dollars, and then managed to get a career boost out of that sleazy affair.

As with the Miami consul and with the rum sales operation, Varela stated that he will not fire the transvestite Canary consul. Of course he won't. If they had to fire each official who makes a fool of himself and the country there would be no end to it.

UPDATE: The consul resigned. But that didn't stop a Miami TV station from dedicating a song to him. Ariba Panama! Vamos bien!