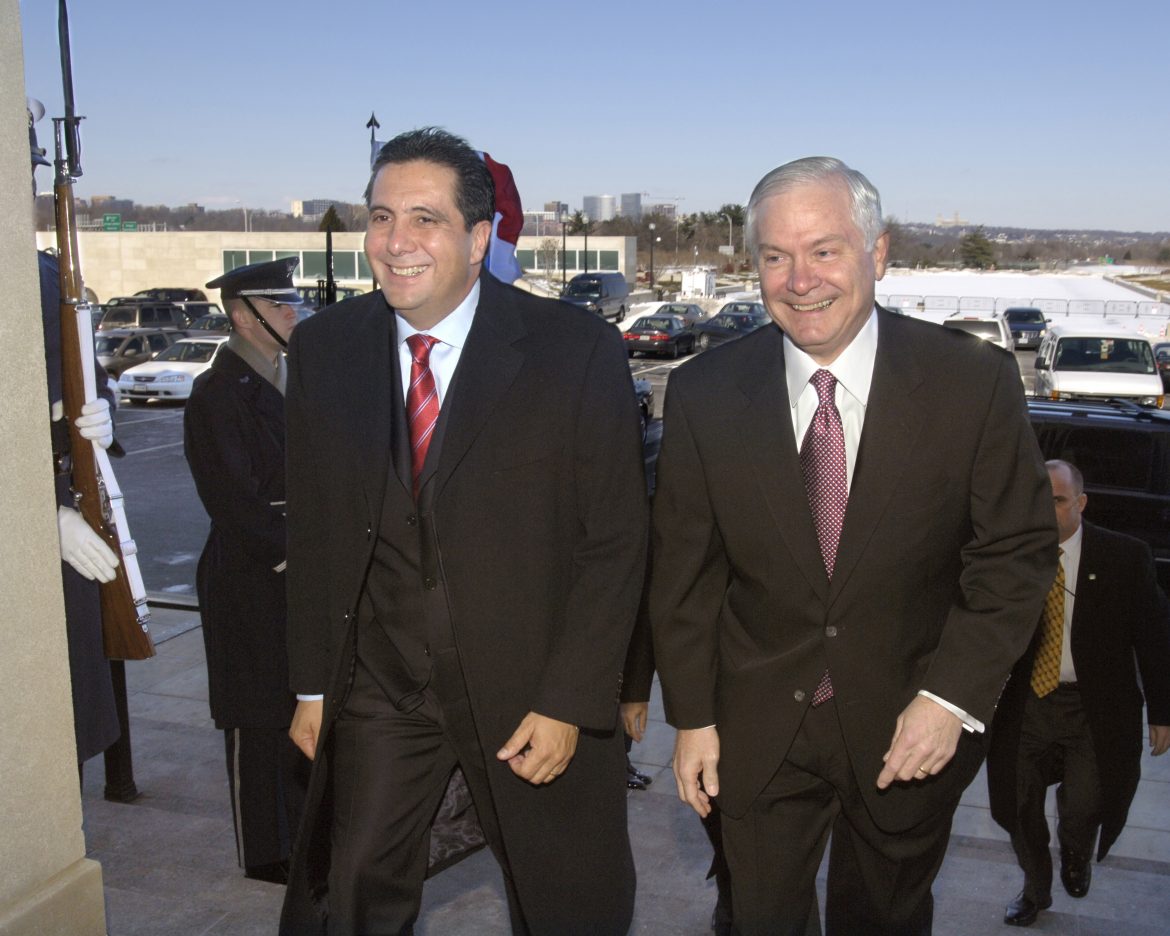 Remember how we had a scoop about a narco kidnap case involving then presidential candidate Martin Torrijos? We ran that story in 2004 while nobody else dared to touch it.

Here is the full text of the confidential cable 04PANAMA896_a:

1. (C) Arnulfista and Solidarity Party opponents of presidential candidate Martin Torrijos have given documents to reporters that they hope will link him to a 1985 drug-related kidnapping. Apparently rattled by a potentially damaging story that could break just before the May 2 election, the Torrijos team has used Democratic Revolutionary Party (PRD) influence with the local media to prevent it from being published. Containing allegations of unproved veracity, the documents (available on a website) tell a tangled tale that attempts to connect Torrijos with sordid individuals from the worst days of Manuel Noriega's dictatorship. The documents strongly suggest that Torrijos had questionable friends but they go further, purporting that he associated with and aided known criminals. The evidence against Torrijos is circumstantial, probably less than enough to convict him in a court of law, but more than enough, his opponents hope, to convince voters not to elect him. This story reads like a Panamanian soap opera and it is difficult to determine whether there is any real substance to this convoluted tale. A search of DEA and other Embassy files has turned up no evidence of Martin,s complicity in any crime. The PRD,s apparent power to control Panama,s weak-willed media -- at least to this point -- is a troubling portent, should Torrijos win the election. End Summary.

2. (C) On April 7, 2004, according to Embassy sources, Martin Torrijos, his lawyers, and his Chilean consultants scrambled to study allegations about Martin,s alleged complicity in a 1985 drug-related kidnapping that later were posted on a website (www.ornstein.org), the day after the documents on the website were distributed to reporters. Public records show that the then 22-year-old Torrijos signed a sworn statement acknowledging that he lent his car to an acquaintance, Raul Mata Zuniga, who was involved in the kidnapping. In his July 1985 statement to a judge, Torrijos swore that he was not aware of the kidnapping plan. The kidnappers apparently did not use Torrijos' car to abduct the victims. The recent PRD strategy session was called after the kidnapping victim, Judy Hidalgo de Watson, apparently told the Torrijos campaign that Solidarity Party legislative candidate Abraham Martinez had offered her $50,000 to speak publicly about the case. Ms. Watson declined the offer, evidently to protect her children from a politically motivated media frenzy.

3. (SBU) The complicated story, which reads like the script to Scarface, goes something like this. In May 1985 Noriega,s drug pilots Floyd Carlton Caceres and Teofilo Watson apparently stole more than half a ton (538 kg or 1184 lbs) of cocaine from the Medellin drug cartel. According to documents on the website, which Embassy has partially corroborated from September 1986 DEA reporting (86 DEA HQS WASHDC 029870), four Colombians came to Panama City to look for Carlton and Watson but, unable to find them, kidnapped Watson,s wife, her daughter, and two brothers, both minors, on June 30, 1985.

4. (SBU) According to Panamanian investigation records, a Panamanian accomplice, Raul Mata Zuniga, brought the kidnappers and their victims in several cars to a farm outside Colon owned by Eric Abrego. Torrijos was at the farm, where he was a weekend guest, according to his statement to police. When Mata's car got stuck in mud near the farm, Mata walked to the farm, with gun in hand, to ask for help. Torrijos agreed to let him borrow his Nissan Patrol. When Mata failed to return, Abrego and Torrijos went looking for him in Abrego's Jeep, whereupon they came upon Torrijos' Nissan, which was also stuck. They also met Mata, the Colombians, Ms. Watson and her children, and several vehicles, including a BMW and a Mercedes. After getting a tractor to pull the cars out, everyone wound up back at the farm with Torrijos and Abrego. After some time, Torrijos and Abrego left but Mata and the other kidnappers stayed. After Torrijos and Abrego left, according to the documents, the kidnappers interrogated Ms. Watson about the whereabouts of her husband, and at one point staged a mock execution of Ms. Watson,s daughter.

5. (SBU) Mata Zuniga and another witness alleged in their 1985 sworn statements that Martin Torrijos later attempted several times to intervene with Panamanian authorities on behalf of the same group of Colombians when they were arrested in Chiriqui Province in western Panama on immigration charges. Allegedly, Torrijos called Romulo Abad, a good friend of Panamanian Defense Forces (PDF) Major Luis "Papo" Cordoba, and PDF Colonel Roberto Diaz Herrera, a cousin of Omar Torrijos, Martin's dictator father. Neither Cordoba nor Diaz Herrera would agree to release the Colombians. There is no evidence to corroborate Mata,s allegations, but they could hurt Torrijos if aired publicly on the eve of elections.

6. (SBU) Diaz Herrera, Cordoba, and Abad are bad apples who evoke images of the darkest years of the Noriega regime for those who lived through them, the last people the Torrijos team wants voters to associate with Martin while trying to convince Panamanians that Martin represents a "new PRD." (See Reftel B.) Diaz Herrera was fingered as the number two in Noriega's drug-running operation and also a accomplice in the 1985 torture and murder of dissident Hugo Spadafora. Luis Cordoba was a close Noriega associate that U.S. authorities arrested in January 1990 for his participation in the Spadafora murder and sentenced to twenty years in prison. Among other things, Romulo Abad is a known alien smuggler. The Department revoked Abad's nonimmigrant visa along with that of former President Ernesto Perez Balladares in 2000.

7. (C) A PRD source told POL Specialist April 7 that former PRD Foreign Minister Ricardo Alberto Arias had pushed TVN (Channel 2) board member Stanley Motta to discourage journalist Lucy Molinar from reporting the case on her morning program, as she was planning to do. Motta warned her (falsely as it turned out) that she might create "legal problems" for herself and the station if she went ahead. Molinar, reportedly upset at what she saw as censorship, evidently bought the legal argument. Torrijos supporter and salsa star Ruben Blades used the April 7 11 p.m. news on Channel 13 (Telemetro - owned by the PRD Gonzalez-Revilla family) to warn of an impending "dirty tricks campaign" against Torrijos as the election approaches. The Torrijos team is apparently resigned that the story probably will get out despite their intense efforts to spike it. The Arnulfistas, our sources say, at one point were trying to have the story published abroad to be later "copied" in local press.

8. (C) During the emergency April 7 meeting at Martin's home (with his legal team, plus Hector Aleman and Hugo Torrijos), according to Embassy sources, the lawyers found no exercisable legal recourse against someone who publishes factual reports of the case. The file in question is a matter of public record in Panama's National Archives. When consulted, Torrijos' Chilean image consultants supposedly told him that if the case surfaces in the local press, Martin should stick to his 1985 statement to police that he was unaware of the ongoing kidnapping. Hugo and Hector reportedly agreed to dig for dirt on Aleman and his associates that they can hold in reserve in case things get nasty.

9. (C) Most of the allegations linking Martin Torrijos and the kidnappers in the 1985 case are not substantiated. On June 30, 1985, Torrijos admitted he lent his car to Mata, one of the kidnappers. There is no proof that he was aware of or involved in any criminal activity. What is not clear is why Torrijos was at Abrego's house when Mata arrived, gun in hand, as the documents state, with the kidnapping party close behind. The question of Martin's guilt or innocence probably would not be as important in the court of Panama public opinion as his association with known criminals.

10. (C) Torrijos opponents, noting Martin's substantial lead in the polls, are desperate to sully Martin's personal reputation, but no one has been able to make any accusation of wrongdoing stick on Martin. Anti-Martin attacks tend to resonate most with voters who already are anti-PRD, who cannot believe Martin really has neutralized the PRD old guard, who were frequently involved in shenanigans like this during the Noriega years. Arnulfista candidate Jose Miguel Aleman has been Martin's most aggressive assailant, although the Endara camp no doubt would like to discredit Torrijos, given Endara's consistent message that the PRD has not changed and will never change. (See Reftel A.)

11. (C) The apparently craven attitude of Panama's press in choosing, so far, not to publish the documents is disappointing, but whether it amounts to "omerta" (the Sicilian Mafia's code of silence), as the website claims, probably is an exaggeration. If Torrijos were President of Panama, Panama's media would likely be much more aggressive toward him. For example, despite La Prensa's pro-Martin bias during the 1999 and 2004 campaigns, it has criticized Arnulfista and PRD administrations alike, inspiring the indignation of Panama's current and previous Presidents for its investigative reporting. Once Martin is "on the inside," public scrutiny of everything he does will increase.

12. (C) While Torrijos public relations team has shown its power to control the media, Embassy believes that the other three presidential campaigns have similar resources and influence to wield in a comparable situation. Controlling the media probably does not come cheap. For instance, Stanley Motta, whose powerful family controls COPA airlines, a large bank, and an import-export firm, as well as several Panamanian insurance companies, may simply see his involvement as good politics in dealing with the likely next president (Torrijos). Motta probably believes that building goodwill with the probable next President is a prudent business move. WATT