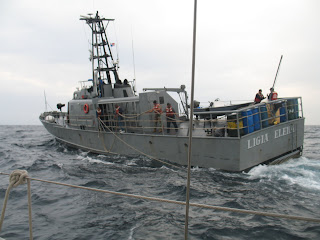 The Ligia Elena, Panama's frigate here seen towing a sailboat, is on its way to France to go get Noriega back.

In a move seen by many as an attempt to distract Panamanians from skyrocketing domestic murder rates and violence, President Martinelli announced today that he has ordered the recapture of former narco strongman Manuel Antonio Noriega from France.

"I have given marching orders to the Servicio Aeronaval, and we've sent its ship, the SS Ligia Elena, to France where our fronterizas will land on the beaches of Normandy", Martinelli explained. "From there they will move on to Paris to get Noriega, and when they return to Panama he will be the first to receive the new death penalty I'm going to introduce", the president told Telemetro.

Noriega himself, through his lawyer Olivier Metzner, stated that he welcomed the initiative: "The last government of that little Torrijos punk did nothing to bring me home".

Noriega has long been complaining about the world seemingly having forgotten about him and fears rotting away in oblivion in a French common prison cell or a mansion on the Côte d'Azur. Early 2007 he released a statement demanding more international media attention and, if nothing else, at least a high profile execution by hanging just like Saddam Hussein had just undergone. Three years later, it looks like that wish will finally be fulfilled. "This is indeed a clear recognition of my importance as a rogue leader on the world stage", an upbeat Noriega stated.

President Martinelli dismissed criticism of the no doubt risky enterprise saying that if the United States can invade Panama to arrest its leader, surely Panama can re-arrest Noriega in France. "So now you guys know why these Israeli instructors have been here for some time now", Martinelli confided to the press.

José Raúl Mulino, Panama's Minister of War and Drugs, referred to Noriega as "this maleante de mierda who lives in a different world than I do" and called the plan a "severe blow to drug trafficking, offering a clear signal to all narco kingpins that we will get them no matter where they are".

The Ligia Elena is, given its age, expected to arrive at the Normandy coast mid-September. The original plan to also dispatch the Panamanian air force had to be canceled because Panama's air force can't fly that far.

However, that gap in the plan of attack will be filled by supporting military action closer to home. "I have ordered police commander Gustavo Perez to take the entire French embassy hostage to further pressure France into peacefully handing over Noriega to our troups once they arrive in Normandy", Mulino explained. Perez, of course, has been practicing this tactic decades ago for mi commandante already, and his spokesman said he was happy with the opportunity "to take another shot at it".