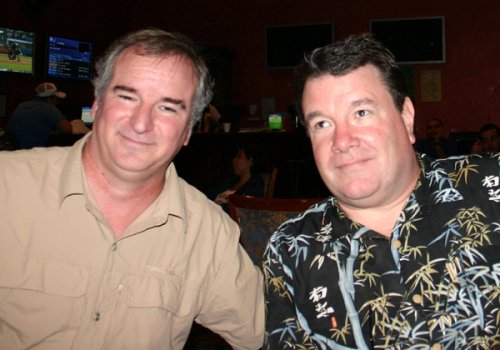 Some people really don't know when it's time to give up, and Mark Boswell, a/k/a "Rex Freeman" is one of them. A gift that keeps on giving.

Boswell was first exposed as an online gambling cheat and financial con man by Eric Jackson of the Panama News. You can read the devastating story here. His career as a lunatic militia man in the US. His bizarre radio show. His financial swindles, most of them promoted on - where else - the Escape Artist website. Again, read all about it on The Panama News.

But it got better! Naturally, after being exposed as a fraud, he was immediately promoted to become a financial columnist on Don Winner's Panama Guide scam pimping website.

Then, Boswell filed criminal defamation charges against Eric Jackson. Boswell of course lost - he didn't show up for the hearing and the fact that a Costa Rican warrant for his arrest was published that same day in La Estrella de Panama didn't help much either. Wrote Jackson:

Boswell alias Freeman was not present for the case. He sent a ringer gringo couple to sit in the courtroom, and as no introductions were made it may have appeared to the judge that he was there. He was represented by two lawyers, attorney Alejandro Moncada Luna making the arguments on his behalf.

Moncada accused this writer of calling Boswell alias Freeman a "terrorist" in the article forming the basis of the case, which is not true, and then launched into a long argument about how, since the United States recently renewed his client's passport, he's obviously not a terrorist. He used this reporter's invocation (on lawyer's advice) against testifying at the indagatoria as "proof" that the article in question was libelous, and said that there was no evidence anywhere to back the claims in the story. (...)

Moncada accused this reporter of having something to do with Boswell alias Freeman having legal troubles in Costa Rica --- not mentioning that those troubles include a warrant for his client's arrest and not explaining how it is that this reporter could or did manipulate the Costa Rican government to obtain the same.

Yes, indeed, dear reader: Boswell's lawyer was none other than Alejandro Moncada Luna, currently incarcerated with Noriega in Gamboa for mega-corruption. Hahahaha!

BOSWELL STARTS A CHRISTIAN SECT WITH VIRUSES IN IT?

After his legal debacle, Boswell stayed quiet for a while. But then we received an email, signed by him, which he has sent to a list of undisclosed recipients. It starts like this:

Right to the point...Our community has a virus and it needs to be stopped.

It has come to my attention that there are one or more among us who apparently see fit to disparage one's character and feed the rumor mill with gossip at the expense of others. When people do this it has the effect of 'assasination'. When one's character is assasinated, is it any different than assasinating the body? Perhaps this is why the bible equates 'busybodies' with murderers...

The fact that it's my character that some seek to assasinate is irrelevant. I'm not concerned about the opinions of people who don't have a relationship with me. I have only one relationship which is important to me and its not with anybody on this earth. But it makes for a good case study for us to reflect upon and since this is going on, it needs to be reflected upon for the good of the community. Thus, you are receiving this email because I find it likely that you have 'at least' been on the recieiving end of this activity and heard some of the gossip. If people hear of such gossip, when they don't challenge it and put a stop to it, they are just a guilty as the perpetrator. So it's important to us all. (...)

Has Boswell gone reli-nutters? Yes. The "community" he refers to is something called the Panama Christian Foundation. They have a website - which curiously doesn't mention Boswell anywhere at all - here. They do things with kids and soccer, a superficial glance learned us. Who would want to send his kids to a convicted fraudster, a wanted man in Costa Rica and an online gambling cheat who now builds a following with some bullshit Christian foundation? No, we neither.

Apparently, not all is love and peace in that foundation, or Boswell wouldn't be forced to address "gossip" about him. So where does the "gossip" come from? Here's what his email says about that:

Much has been written about Eric Jackson and Okke Ornstein (the sources) who make a living creating monsters in their own imaginations so that they can come along and be the hero of the day by 'exposing' them to the public. Losers with no personal accomplishments in life to point to always make themselves feel important by tearing down others. Jackson is an admitted unmedicated bi-polar personality who was fired by his last legitimate job at La Prensa for printing 'false stories' with fabricated facts. But you wouldn't know that if you haven't done your due diligence. They both have a trail of 'victims' going back years. Ornstein has been criminally convicted here in Panama for such activity and Jackson would be too if the Panama legal system was worth anything. I
would know. So if those are the people you want to follow and give credibility to, that's your choice.... 'birds of a feather...."

As for me: my work speaks for itself. I don't need to defend it.

Yes, it pretty much speaks for itself: Here is his criminal record in the US.

Yes, his lies speak for themselves: Eric Jackson never worked for La Prensa, and logically he was thus never fired by that paper.

Yes, his words speak for themselves: Ornstein's so-called "criminal convictions" (all cases for "crimes against the honor" of various criminals who don't like being exposed on these hallowed pages) have either been overturned or are on appeal.

The only one who keeps losing his criminal cases is Mark Boswell himself.

OH, HE WROTE A BOOK TOO!

One such email is of course just a petty attempt to save his crap foundation from going under because people find out the truth about him. But Mark Emery Boswell goes further to establish himself as an entirely credible person in the parallel universe where people like him live: He wrote a book! It's called One Freeman's War, and self-published on Amazon under only half his name. Here's part of the description:

This story is an adventure of discovery. It involves an evolutionary metamorphosis of knowledge and the power it can bring. You will find political intrigue and a high stakes power chess game as one individual confronts the entire political and financial power structure of the USA. Through relentless study and inquisition, the character, Rex Freeman and others put the legal and financial system in America under the microscope with knowledge, history, and some amazing insights.

He also has a website for the book full of batshit crazy conspiracy gibberish.

So, this is what it's all about: Boswell creates a "Christian" foundation to build a "community" and then sends a rambling email about gossip in order to promote his book to his followers.

Where have we seen this before?

Right: Once upon a time one Tom McMurrain used Christianity to fleece churchgoers in Atlanta, as well as a pastor, out of their life savings so he could live the high life and eventually run to Panama to start new and better scams. Eventually - after losing libel cases against Jackson and yours truly - he was arrested and extradited.

Right: Once upon a time one Eddie Ray Kahn came to Panama and started a religious expat organization that would have meetings in a casino where he'd say prayers while trying to sell bogus tax schemes. Eventually he was arrested and extradited as well.

See a pattern here? We do, too. We wonder, does this Panama Christian Foundation really have people dumb enough to sign up for it or worse, donate money?