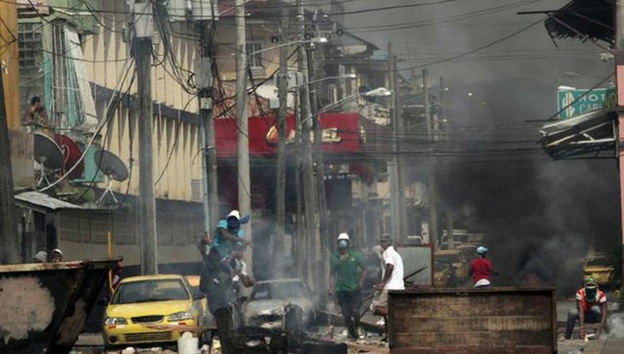 Today - Wednesday 24th - was relatively calm in Colon after a week of protests and gun fights in the streets. President Martinelli, hiding out in Japan and due to resurface in Vietnam, made his usual move of announcing a radical policy change through Twitter, saying that the Colon Free Zone (CFZ) land would not be sold but rents increased by a 100%, the proceeds of which would go to Colon.

The problem with that is that he did not say that the hated law which allows for the fire sale of the CFZ would be withdrawn. On top of that, nobody really believes Martinelli any more, after a plethora of broken promises about mining, exploitation of water resources, efforts to secure reelection and so on.

As a result, protests continue, despite Martinelli's twittering from Japan. This afternoon the car tires were burning again in the streets of Colon, and stones flying towards the hated police.

A strike of the Chamber of Commerce in Colon has been prolonged. Construction workers union SUNTRACS will do a 24 hour "warning" strike against the government and its plans. In Changuinola, Bocas del Toro, the bridge over the river is closed. Students of the Instituto Nacional have been battling it out with the police in the capital. Frenadeso marched in Penonome and other places. A big march was held in Panama City.

Tomorrow, the Ngobe Bugle indigenous people are joining the protests, with various manifestations throughout the country. They know exactly what it is to wage war against Martinelli's attempts to sell the land from under their feet to line the pockets of him and his friends.

So what we're seeing is protest that goes beyond coercing the government into dropping its CFZ sales plans. It's no longer against one piece of misguided policy; it is against Martinelli himself, his accomplices, against the constant abuses, the broken promises, the violence, the unprecedented mega-corruption and the fact that the highest economic growth in Latin America has not done anything to close the gap between rich and poor.

And, it seems, it is just gaining steam, and mostly so outside of the capital, where protests are usually limited to ritual marches - and never in the weekends. Last but not least, it's also interesting to note that Martinelli's corrupt competitors, the Panameñistas and the PRD, do not seem to be able to take much advantage of the current situation - people don't trust them either, and their "support" for Colon after decades of abandonment sounds a kind of hollow.