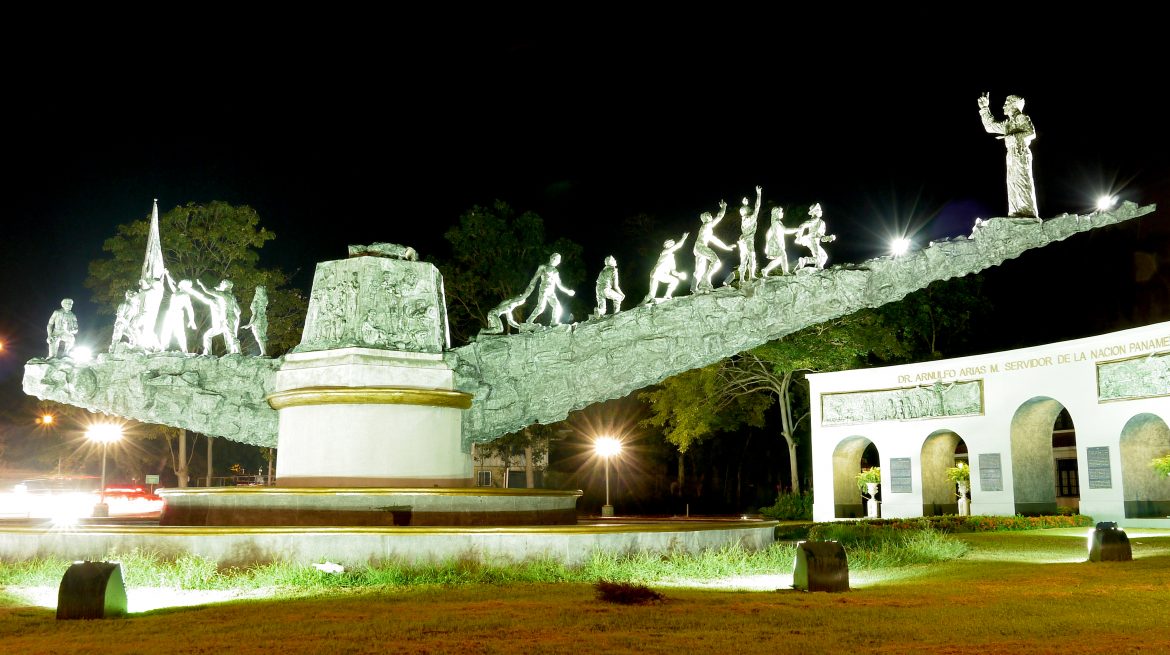 The atrocious monument for Arnulfo Arias in Panama City.

Hello Bananamistas! Did you enjoy the funeral of the Great Leader Kim Jong Il as much as we did? And did you also wonder why we, here in Panama, don't have such festive events with thousands of people weeping and crying and screaming as if there's no tomorrow? Well, dear reader, all of that is going to change!

After first bringing a semi-dead corpse back home - Noriega - our leaders are now planning the state re-funeral of Arnulfo Arías Madrid, the former president, putschist, nazi sympathizer  and late husband of also former president Mireya Moscoso. He had already been buried decades ago, and the tax payers gave him this really expensive monument, but now we're going to do that again, in Panama, next Friday! That's right, they're digging up the bones as we speak, and then Thursday there's some church thing with all Mireya's  ex-ministers and Friday the poor sod will be put in a specially built tomb, together with Mireya's durodolares (Okay, I made that up; she has already spent the durodolares, on furnishings for the house she stole at Punta Mala).

Mireya Moscoso - a sleazy kleptomaniac who spent an average of $1,000 a day of state money on jewelry, perfumes, watches and liquor during her five years in office - has invited any and all mobster politician she could find to the event. Uribe will be there, and our own Martinelli will be the speaker of honor! Boooo-ing him is already being organized, by the way, by people who don't like him and this bunga bunga necro-fiesta with Mireya and the dead Doctor Arías. Big question: Will zombie terrorist Luis Posada Carriles be attending too?

The best part of all this is that in Panama you have two dominant political-ideological movements, or better said, wacky personality cults. "Arnulfismo" is the blind adoration of the nazi-admirer Arías. And then "Torrijismo" is the mindless adoration of murderous tin-pot dictator Omar Torrijos, who died in a plane crash. Since these two sects can't stand each other, the Torrijistas will probably want their own death-porn event with Omar's remains, or otherwise when Noriega dies. Maybe they can start planning with him, just like Maggie Thatcher is doing.

Oh, in case you wondered, "why is Mireya teaming up with Martinelli?" That goes like this: Varela and Mireya are competitors for power in the Panameñista party. Varela broke up the government alliance with Martinelli. Mireya wants to use that to rise to power again and become Corruption Queen one more time. Aren't those dead people great for political fun and games? With a bit of luck, in five years they'll dig up old Arnulfo again if that suits Mireya one way or the other!