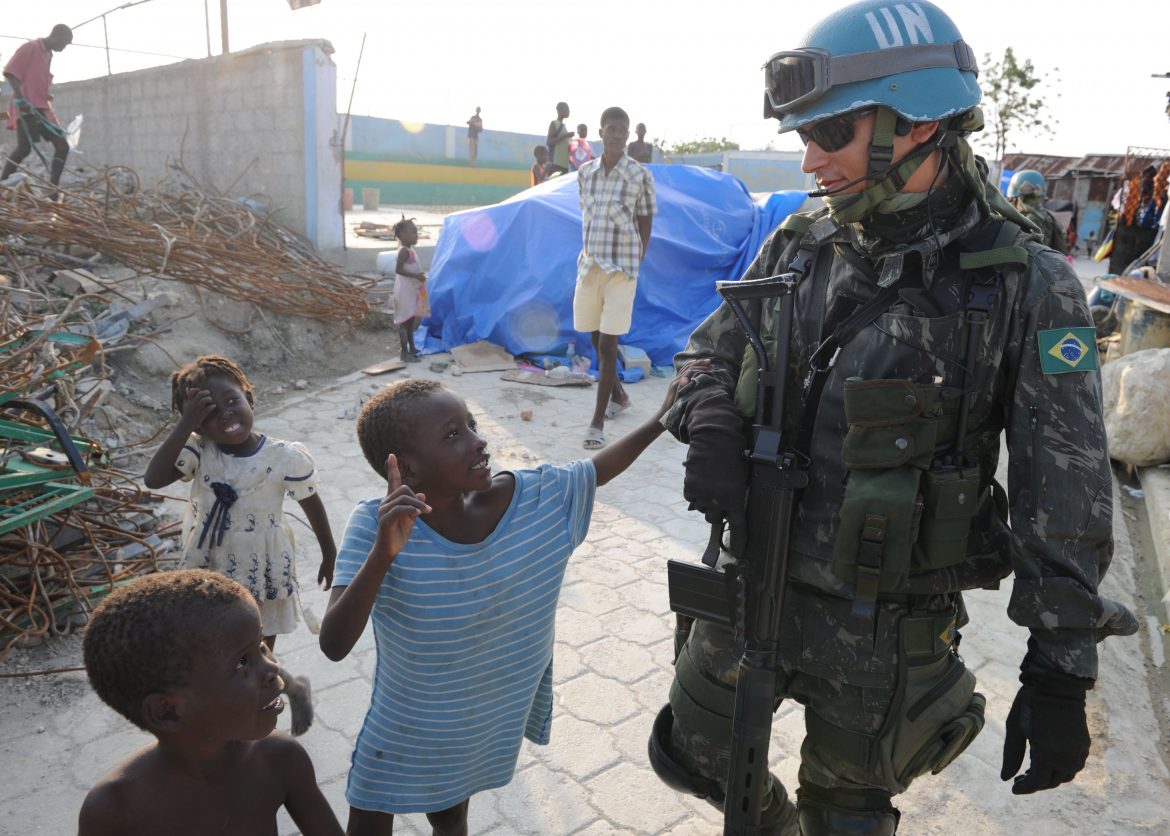 US peacekeeping soldier in Haiti

Retired US military and intelligence officers living in Panama are behind a shadowy company, Consultants Advisory Group, that is involved in espionage, possible violations of human rights and interference with upcoming elections in Haiti.

The company, which operates under the name CAG Internacional, S.A., is involved in stationing Topcat Marine Security fast patrol boats off the coast of the poor Cite Soleil area, has spies posing as journalists at presidential election debates and has indicated its involvement with the arrest of whistleblowers and critics of its operations.

This story was first broken by Kathryn Cramer, who publishes a weblog about overt intelligence operations from Pleasantville, New York. Cramer had been contacted by two sources who claimed that CAG is carrying out espionage activities related to the upcoming elections and is involved in stationing fast patrol boats off the coast of Cite Soleil. That empoverished neighborhood is virtually sealed off from the rest of Port au Prince by the infamous Haitian police and UN "peacekeeping" forces. According to Cramer's source, Haitians trying to escape by sea are chased down and shot by those manning the patrol boats.

Topcat Marine Security had in November last year been contracted by the interim Somali government to "fight piracy" off the coast of that country. However, the US Department of State's Bureau of Arms Control in December issued a Cease and Desist order to Top Cat Marine Security on their pirate-fighting contract with the African nation.

A United Nations PowerPoint presentation obtained by Cramer (download fullpresentation here) explains how CAG provides covert surveillance - agents posing as journalists - during a debate between presidential candidates in Fort Liberté. The authenticity of that documents is disputed by CAG, despite the document properties pointing at the UN peacekeeping forces as the authors.

CAG had at that time a website stating that they specialized in "Anti-terrorism and Terrorism incident response; Strategic Intelligence Management; High Risk Operations Management" and a host of similar activities. They claim to "enjoy the highest possible credit rating" and capability "of servicing classified contracts." Screenshots of the constantly changing CAG website can be found here

Kathryn Cramer contacted the company and corresponded with one of its representatives who goes by the name of Valerie Sendecki. In that correspondence (download full pdf file here), Mrs. Sendecki claimed that both sources of Cramer have been arrested; one in the neighboring Dominican Republic and one in Haiti, and that the latter has been expelled to Miami. Sendecki also provided evidence that CAG had access to the phone of one of these sources, pointing out exactly when Cramer had called and from which number.

Sendecki explained that, apart from a contract with the Haitian National Police and other Haitian institutions, "We also have a prime contract with a South American military force to advise on “Multinational Joint Missions Activity Coordination” in their role within MINUSTAH. We are also actively involved in consultations to manage the flow and production of actionable intelligence against the criminal gangs that run much of the country now."

That is no doubt Brazil, which is commanding MINUSTAH (the UN forces in Haiti). In plain English, "manage the flow and production of actionable intelligence," means that they are running espionage and informant networks. There have been numerous documented allegations of human rights abuses and murders involving these Brazilian forces in Haiti. The Haitian National Police, for whom Sendecki claims to be working, is widely reported to randomly execute "terrorists" and of being involved in kidnapping, torture and extortion, and appears to be doing the dirty work for the UN forces as well as the US supported puppet government - installed after the US arranged and carried out the coup against democratically elected president Aristide.

Who or What is CAG Internacional?

According to Mrs. Sendecki, "CAG Internacional, S.A. is a Panama City, Republic of Panama registered corporation. We are based in Panama because the owners retired there when they left the US Army. Having been instructors at the former US Jungle Warfare Training Center, they found wives there and fell in love with the lifestyle. There are also numerous business advantages and asset protections. It’s also very inexpensive to live there," wrote Sendecki, who claims to live in Tampa, Florida, herself.

We set out to check on this CAG corporation. However, an extensive search of the Public Registry which lists all Panamanian corporations did not reveal any company by that name. We contacted Mrs. Sendecki, who replied: "The registry is useless unless you know the name of the original corporation. CAG is not going to give away its privacy. It serves no benefit to the corporation or its members."

Similarly, Sendecki also refused to reveal the names of the principals of the company. After first claiming that "CAG is an international management consulting firm. CAG is not a mercenary, intelligence or black-ops" organization." she then stated that "This is a security precaution because our people live and work in dangerous places doing dangerous jobs."

"Management Consultancy" a dangerous job? A management consultancy firm that does such dangerous work in such dangerous places that not even its real name can be revealed? "Production of actionable intelligence," but they are not an intelligence organization? "Highest possible credit ratings" for a company that legally does not even appear to exist?

If CAG is a normal consultancy firm as Sendecki claims, why does it fail the normal business due dilligence smell test so miserably?

Confronted with leaking information, unfavorable publicity and huge discrepancies in their own statements, the mysterious people behind the shadowy outfit tried to control the damage. First, Kathryn Cramer was accused of aiding terrorists, narco-traffickers and anti-democratic forces in Haiti, of which she would be either a victim or an agent-provocateur. The author of this article, in his turn, was accused by Mrs. Sendecki of being an "agent of Mrs. Cramer" while Mrs. Cramer herself was called a "communist."

Simultaneously, multiple persona popped up trying to silence the publicity. Kathryn Cramer corresponded with one "David Reuther", who came out of the blue and set out on a quest to "verify the facts." Also one "Jay Fullerton" surfaced as a principal of CAG, who ordered Cramer "never to contact us again." We received that bizarre order from Mrs. Sendecki as well.

There exist indeed retired US military and intelligence officers by these names.

Further attempts by CAG to minimize damage consist of posting denials of any wrongdoing on various weblogs. Typically, the outfit does not provide any verifiable information that would clear up the various issues and refute allegations.

However, most emails these people sent, including Mrs. Sendecki, originate from the same IP address which traces back to Haiti. Further research revealed that Brazilian soldiers send messages home from that same IP number. That indicates they're using either the same computer or the same local network.

CAG, on its rapidly changing website, listed a Panamanian office address at Sun Tower, 7th floor, in Panama City. We checked that address, but on the 7th floor of the Sun Tower there is - not surprisingly - no office of CAG Internacional or any other company that could be perceived as such. Why not? Well, the Sun Tower office building has only three floors, that's why.

And the bad publicity may not be the end of CAG's troubles. Noriegaville obtained legal counsel and we were advised that it is illegal for Panamanian corporations to provide military and intelligence services to foreign governments, their agencies or multinational organizations such as the United Nations.

And it's not just Panamanian residents who are - according to their own statements - involved with this shady outfit. Sendecki also wrote that they "like the Topcat boats" but that "we can get the same boats (if we have a buyer) from a Panamanian company that mimics their design." Producing and exporting patrol and assault boats from Panama is, however, also illegal.